Coming from Rome, Ocriculum was the first Umbrian town one came across when going along Via Flaminia. Due to its strategic position, along the consular road and close to one of the main Tiber ports, Ocriculum must have represented an important commercial hub in olden times. 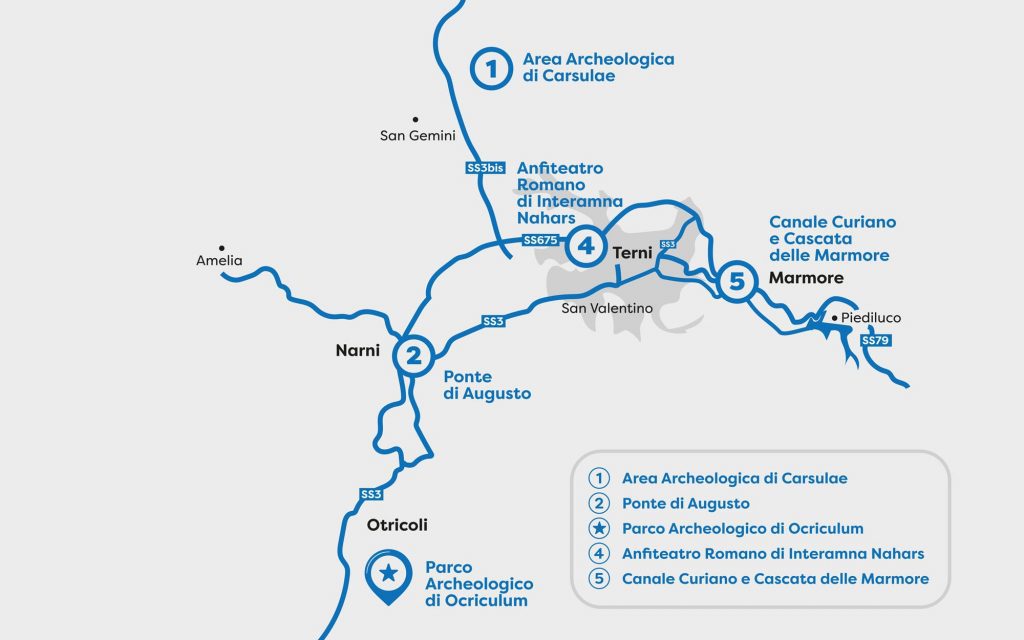 Coming from Rome, Ocriculum was the first Umbrian town one came across when going along Via Flaminia. Due to its strategic position, along the consular road and close to one of the main Tiber ports, Ocriculum must have represented an important commercial hub in olden times.
It became a municipality after 90 B.C. under Augustus and it was included in the Regio VI, Umbria, and at the beginning of the Imperial Age it experienced a flourishing urban development.
The settlement certainly experienced a development following the creation of the Via Flaminia, but the best known phase is that between the end of the Republican Age and the Imperial Age when the main public and private buildings were built.
The first extensive investigations in the area of the ancient town were carried out between 1775 and 1783 commissioned by Pope Pius VI.
Many of the works of art that were found were transferred to Rome and still adorn the halls of the Vatican Museum.
Instead the most recent materials found are on display in the Antiquarium of the archeological area, set up inside a house near the Church of St. Fulgenzio and built on a large Roman cistern, perfectly preserved and open to visitors.
Thanks also to the most recent archeological excavations, geological surveys and surface reconnaissance, today we can imagine the ancient urban layout.
Via Flaminia came from the south and entered the urban area going towards the forensic square then carried on in the direction of Narnia.
At the entrance to the town we find two impressive funerary monuments, a tower and a round mausoleum located along a paved stretch of Via Flaminia, brought to light by the excavations conducted by the Superintendence.
The round funerary monument still boasts all its grandeur.
It has a 16m diameter cylindrical drum on a quadrangular base of 19 m per side, for a total height of 6 m. It is faced with large square limestone blocks, and on the front looking towards the road, a bench with lion paws and two side cells.
The mausoleum is flanked on the left by a public fountain and on the right by the large tower tomb which is clearly visible from afar coming from Via Flaminia. With a square plan surmounted on a circular body, the funerary monument retains only some traces of its original marble cladding.
The tall pillar that stands isolated a little further ahead, with reticulated masonry, is traditionally attributed to the southern gate of the town.
In the central section of the archeological area, the main public monuments can be found, among which the so-called Great Substructures stand out, certainly one of the most impressive and representative ancient monuments among those preserved.
Formed by two floors of vaulted rooms in succession, they had the function of artificially supporting and prolonging the part above, forming a terrace ideally orientated towards Rome, which housed a complex of public buildings.
The theatre stands next to the large substructures and was built in the Augustan Age. The back of the theatre leans against the slope while the front occupies the artificial esplanade built in Roman times to infill the valley of the San Vittore river. The cavea, with a 79 m diameter, and the external perimeter consisting of a wall in reticulated masonry supported by pillars of large squared blocks of tuff with an ashlar design are preserved.
Along from the substructures and theatre is what remains of the spa complex of Ocriculum, built around the middle of the second century A.D. and restored several times, up until late Antiquity as the inscriptions testify.
A large octagonal room, another circular and a pillar between them are visible.
The famous polychrome mosaic comes from this building and is preserved in the Round Room of the Vatican Museum. It is laid-out in eight sectors with representations of scenes of the fight between the Centaurs and Greeks and marine scenes with Tritons and the Nereid.
North of the centre, along which was the ancient bed of the Tiber, stood the Port of Ocriculum. It was active from ancient times until recent centuries, before the floods of the river and its final displacement caused its abandonment.
South of the urban centre we meet the amphitheatre, built as was usual outside the town. It is 100 meters by 78, partly built and partly made by digging the natural tuff from the hillside.
Due to its commercial vocation and strategic position, at the gates of Umbria and close to Rome, Ocriculum was ensued a long prosperity. From here Umbrian agricultural produce and artisan products could easily be transported along the river to Rome. 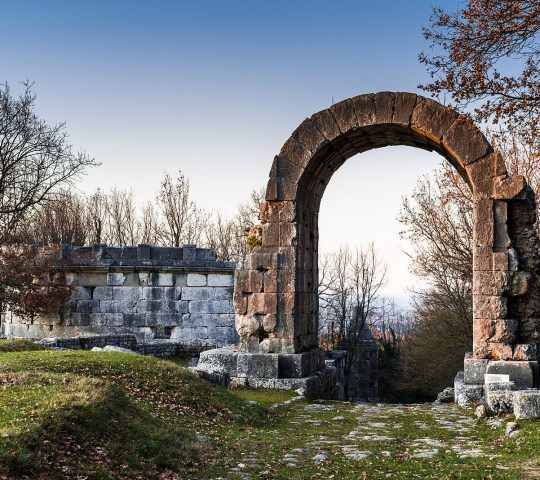 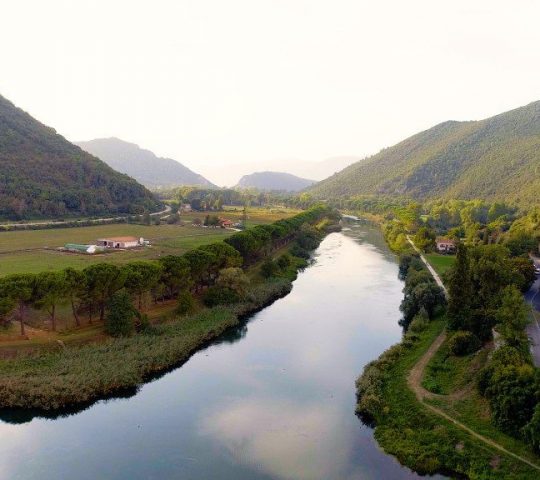 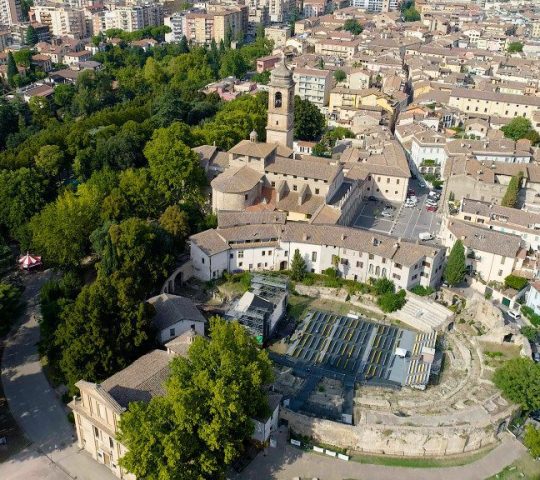 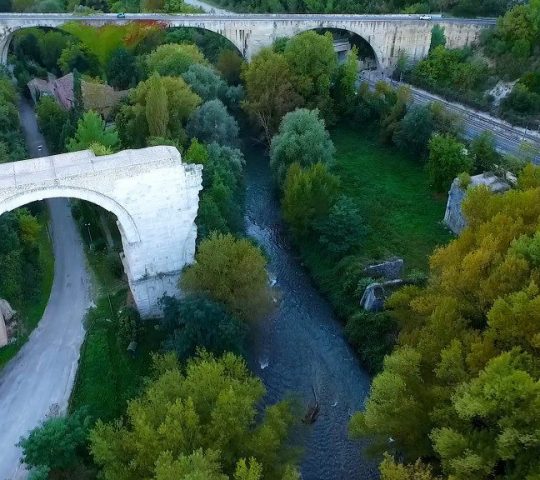 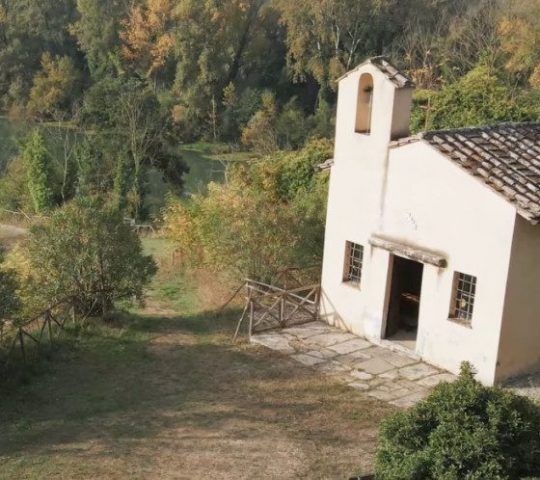